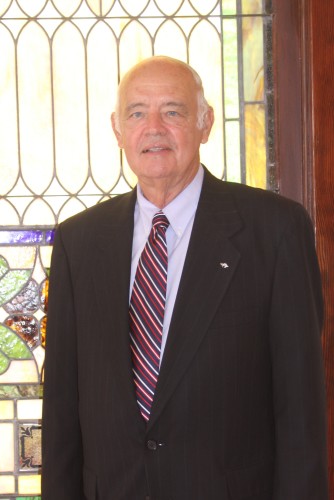 Mr. George L. DeLoach is son of G. Pratt and Mildred DeLoach.  He graduated from Waynesboro High School and attended the University of Georgia where he earned his BBA Degree in 1964 and also Graduated from the Dallas Institute/Gupton-Jones School in Dallas, Texas with his Mortuary Science degree in 1966.  In 1964, he married the former Jane Yonce of Augusta.
In 1972, George was the youngest appointee to the Georgia State Board of Funeral Service, appointed by Gov. Jimmy Carter.  He served 12 years total, with two of those years as President. George was also elected Mayor of Waynesboro and served from 1980-1992. Later he was elected again and served from 2004-2008. He left the Mayor's office in 1992 to run for Congress. He was narrowly defeated.  However, George was elected to the Georgia House of Representatives in 1994 and was re-elected four times, serving until 2002.
George is former member and treasurer of the Waynesboro Exchange Club. He is also a former member of the Junior Chamber of Commerce, Rotary Club, and Sons of Confederate Veterans.
He is past Worshipful Master of Waynesboro Lodge 274 and past president of the Shrine Club, Waynesboro Country Club, and Burke County Bulldog Club.  He is also past district  vice-president of the University of Georgia Alumni Society. He served on the Board-of-Directors of the Bank of Burke County.  George is co-founder and past President of the Southeast Coalition of Working Americans.
George is currently a member of the Alee Shrine Temple in Savannah, and serves on the Burke County Board of Commissioners as wells as  the local Board of Health.  He also serves on the Board-of-Directors of the Southern Bank.  He is President of Burke Memorial Gardens, Inc. and owner and operator of Burke Memorial Funeral Home.
George and Jane DeLoach have 4 daughters and are members of the First United Methodist Church.

Peggy Brinson Langham is a native of Waynesboro and graduated from Waynesboro High School in 1948.  She attended Kerr Business College and retired from Fort Gordon' resource management department as a budget analyst, having served from 1954-1987.

"Miss Peggy" has been an associate since 1992.  She has three children and six grandchildren.  She and her husband, Wyman, live near Waynesboro

Mr. McWhorter was born, reared, and educated in central Kentucky and graduated from Eastern Kentucky University with BA in Economics.  He retired from U.S. Army in 1989, with a career that spanned 27 years of both active and reserve service.

He moved to Waynesboro in August, 1998 and and one year later met his future wife, the former Jacqueline Elaine Glisson.